View over the Sound of Eriskay and Calvary island.

Asked a woman when Alexander was just standing outside the tent. He turned around to see a family consisting of mum, dad, two dogs, a son and a daughter wearing purple wellies and a pink raincoat. I peeked through the tent-opening and saw the girl hopefully looking up to Alexander, smiling, showing teeth too big for her small face. The long blond hair peeking out from under the rain hoody.

How on earth got this little girl, with her family, in the rain on this outcrop of the island? And I in my mindeye I began to see the story that brought her to this spot.

I Imagined how she went with mum and dad to the pub for lunch yesterday. It was alright, fish and chips and her favourite soft drink, which she drank slowly with a straw while watching the raindrops trickling down the windows of the pub. The island Eriskay is boring for a girl like her at that age, the pub is boring, her brother definitely was boring.
While mum and dad were having coffee she looked at the black and white pictures on the wall. A boat with a load of people around it.
There was an elderly man in the pub with a few stories to tell.
‘You know what that is?’ Asked the elderly man with a pint of beer sitting next to the picture.
She shook her blond head with the straw still in her mouth.
‘Well, it’s the SS Politician, she was on her way to Kingston in Jamaica with a shipload of whiskey on board when she came in a pretty bad storm. In the early hours of Thursday, 5th of February 1941, just of Roshinish point, 150 yards from Calvary island. I remember it as if it was yesterday. I was just a wee lad of 8 years old… 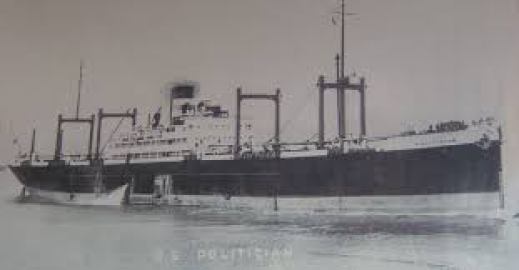 The SS Politician in better days.

Mesmerized she must have been listening to the man, was it the soft Gaelic accent or the tone of his voice? It was as if she was there in 1941. The Islanders opening their houses for the shipwrecked crew. How the islanders smuggled the bottles of whiskey from the shipwreck. How they played tricks on the customs men and the police when they were hiding the whiskey and other stuff they looted from the ship. How everyone on the island was drunk for a month…. Her little-girl world suddenly became adventurous and exciting.
And as a proud Eriskay islander he ended his story with:
‘If you are very lucky you might find a whiskey bottle somewhere on the island. Not all were found again, you know, after hiding them,’ he said with a twinkle in his eyes.
‘You can still see the shipwreck today, just on the northeasterly tip of the island at low tide.’
The man looked around with a knowing smile and taped with his wrinkled finger under his eye. The entire pub was silent. The girl snapped out of the enchantment when everyone started clapping and thanking the man for the story. 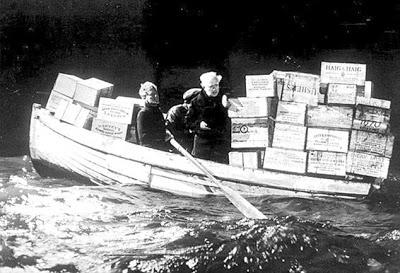 Islanders with their little boats full of goodies

‘Mum’, she asked as they were driving home to the self-catering cottage, ‘can we go and see the shipwreck tomorrow?’
‘Well, I don’t know. Let’s see what the weather is like. I thought we were going to Kildonan museum’
‘But I want to see the shipwreck’, she whined pouting her lip.
‘We will see tomorrow morning.’

That evening she was drawing pictures of the sea and a purple boat with smoke, a big rock and small boats and a rainbow with ‘Whisky Galore’ written in it. I imagine mum had to help with the writing.

Early that morning when some daylight was hesitantly poking through the curtains, she heard the soft rain on the roof. She tiptoed barefoot in her pink pyjamas through the house to her parent’s bedroom and slipped into the bed, to snuggled up against to her mother’s warm body as little girls do.
‘Can we go to see the shipwreck today’, she asked softly.
Her mother moaned and stirred a little.
‘Talk about…breakfast’, mum said in half sleep and sighed deeply.

‘What are we going to do today?’ her brother asked while having breakfast
‘Well, your sister wants to see the shipwreck.’
‘But it’s raining and I thought we were going to the Kildonan museum. She always gets her way, it is unfair.’
‘We might be able to combine the two, besides, we will have to walk the dogs’
‘I don’t want to see a stupid shipwreck’, her brother said and folded his arms over his chest.
‘Too bad, you don’t have to look at it, you can do the dog walking while we go and see the wreck. Deal?’

She did not care about the rain and put on her purple wellies and pink raincoat. She skipped and hoped from stone to stone. Flew up and down the hill, running after the dogs, while mum and dad walked with bend head against the wind and rain in their wellies. The north-east side of the island was in view, almost there!

On her way to the the remote landpoint there was a tent, a man standing outside of it and a woman peeking her head out the small opening.
‘Do you know where the shipwreck is?’ asked mum. ‘It should be around here somewhere.’
‘Well, I haven’t seen one’, said the man,‘and we came from South Uist yesterday by kayak.’
‘Oh, I see.’ She looked at her daughter from whom face the expectant smile was dripping off. Shoulders sagging down with disappointment.
‘Is it low water yet?’ Mum asked.
‘Yes, thereabouts. It still has 1 hour to go.’

She walked onto the beach. It must be there, it must be! That old man said so.’ Her little wellies were slowly sinking in the soft sand, the rain drizzled down on her raincoat. Was the water still going down? There were no big waves, the wreck should be visible any minute now.
‘Mummy, what time is it?’
‘We still have 15 minutes to low tide.’
‘There is no shipwreck, is there?’ she said staring at the water with tears in her eyes.
‘I don’t think so, honey’ her mum said softly.
She wiggled her wellies out of the sand, turned around resolutely. And walked away with angry steps. On her way she passed 2 kayaks, one was purple, her favourite colour, but she did not take a second glance at the bloody stupid plastic things.

View over the Sound of Eriskay with kayaks.

Without waiting for her parents and brother she walked back in de direction where she came from, yelling over her shoulder, ‘I never want to go to back to that pub, again!’

Her words echoed over the water, reaching the two kayakers at the tent, who simultaneously looked up, where they saw the little girl running over the hills and yelling to the big, big sea.