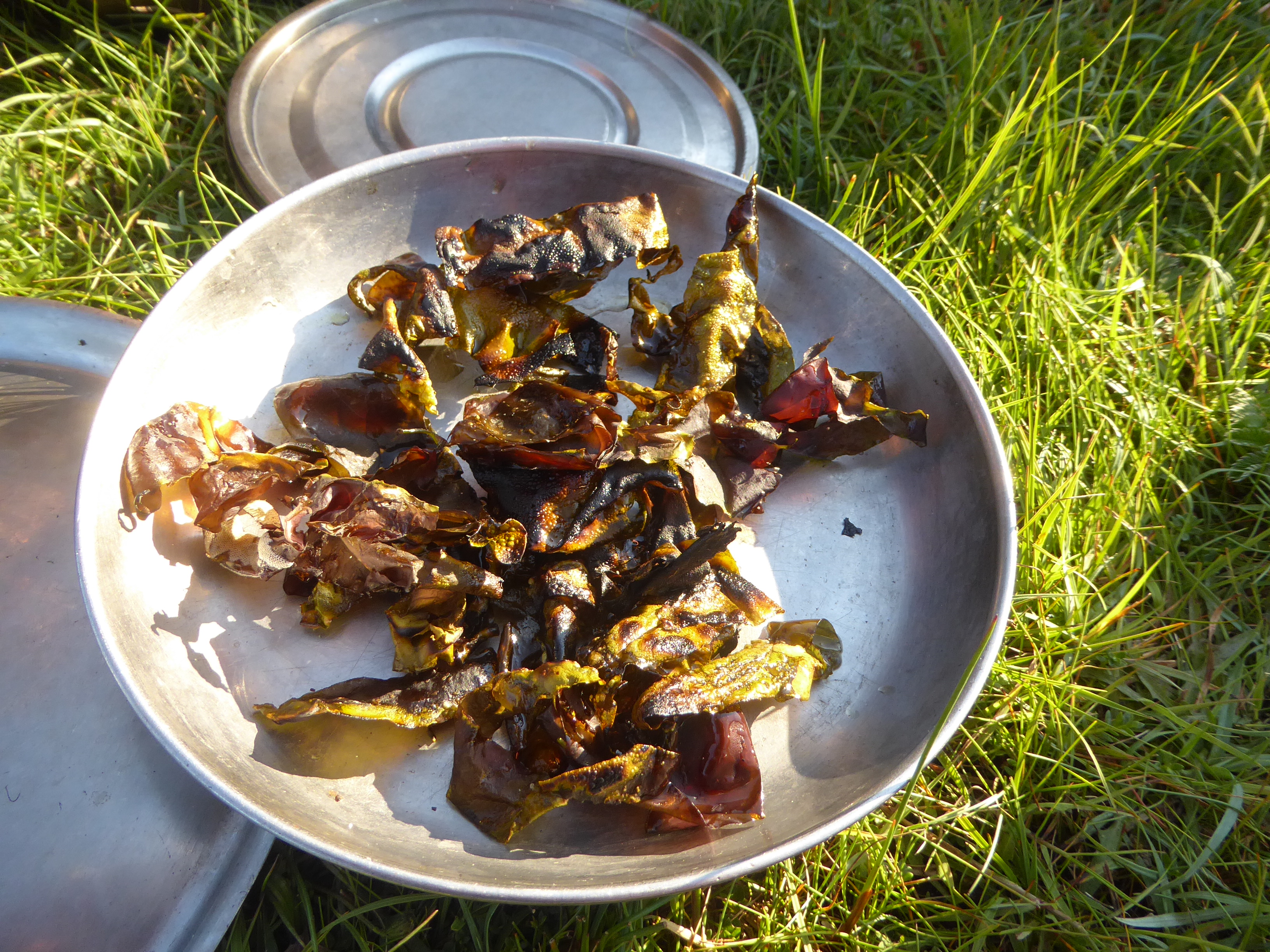 “Do you know the different types of seaweed?” the guy asks, he’s one of the 14 nephews and cousins we just met. They stay in the large house for the yearly work party on the currently unpopulated island of Ensay or Easaigh in Gaelic. Standing side by side, the house and chapel shape the deep sandy bay on the east side of the island surrounded by the fast flowing water of the Sound of Harris. He is lucky, this year I had decided to learn the names of the seaweeds we normally encounter and brought an identification guide to the most common seaweeds. Brian, the guy just asking about the seaweed is interested in eating them.

I know my seaweeds in a way. I know the different species by their toughness because I like to tie my kayaks to them. I also recognise them by their slipperiness by just carrying heavy boats over them. Especially Charlotte is very good in the sliding bit. But most importantly I used them as my watch. Each seaweed species identifies a period in the rise and fall of the water and by knowing the high and low water times of the tide it easy to derive the time from them. This year their names interested me and during the trip, I took little expeditions with my identification chart to name some of the seaweeds. I had hopes that with the names I could find recipes to cook them in the future. So I said “yes” to Brian “I know some seaweeds” and we decided on a foraging trip at low tide the next day. One of the other nephews joins; he wants to find razor clams. We had heard about the trick of sprinkling salt around the holes that appear in the sand at low water. For us, this is normally a problem, because salt is a commodity that we don’t carry in a quantity that is useful for hunting razor clams. They have plenty of salt in the house so we give it a try. We are not very successful and with hindsight, I think we didn’t find the right holes. Apparently, you have to look for keyhole like shapes in the sand to find your meal of razor clams and we only found round ones.

After a while, we started going through the seaweeds on the rocks left and right of the beach. Not only collecting the Sea Lettuce (Ulva lactuca) and Dulse (Rhodymenia palmata) but also Common periwinkles from between the different types of Wrack. He returns the favour by inviting us into the large kitchen. There is a nice atmosphere in the house. The large group of people, mostly in their 20s hanging relaxed and loose on chairs and in couches. They join in small groups for all kinds of activities. Some fanatically play games on the table beside the window and others sing accompanied by the sound of a guitar, a nephew takes his fishing rods and goes out for some rock fishing. Brian is joined by one of his nieces and starts experimenting with cooking and frying the seaweeds. He goes around like a chef, tasting and then trying something else. This is the part we never tried, afraid that we would burn the non-stick coating of our frying pan. When he is happy with the results he prepares the whole bunch of seaweeds. The blanched Sea lettuce radiates a bright green colour while the Dulse is a crispy snack fried in very hot oil.

At dinner time everybody joins around the long table in the kitchen. Our bounty of the foraging trip proudly presented as the appetiser before dinner. Everybody agrees on the fried Dulse, it tastes delicious. I judge the Sea lettuce as okay but not so special as the Dulse. Eating periwinkles, however, is for some a little bit too much, the idea of eating snails turns their smiles into expressions of disgust.

This problem is quickly solved by those who like them. It involves some work to gather around 70 periwinkles on Ensay. Usually, it is not a big problem to collect them and it is the amount Charlotte and I normally would eat together with a glass of cider. With 14 people, however, this only accounts for five periwinkles per person. The leftover periwinkles are quickly gathered and redistributed to the people who enjoy their flavour. 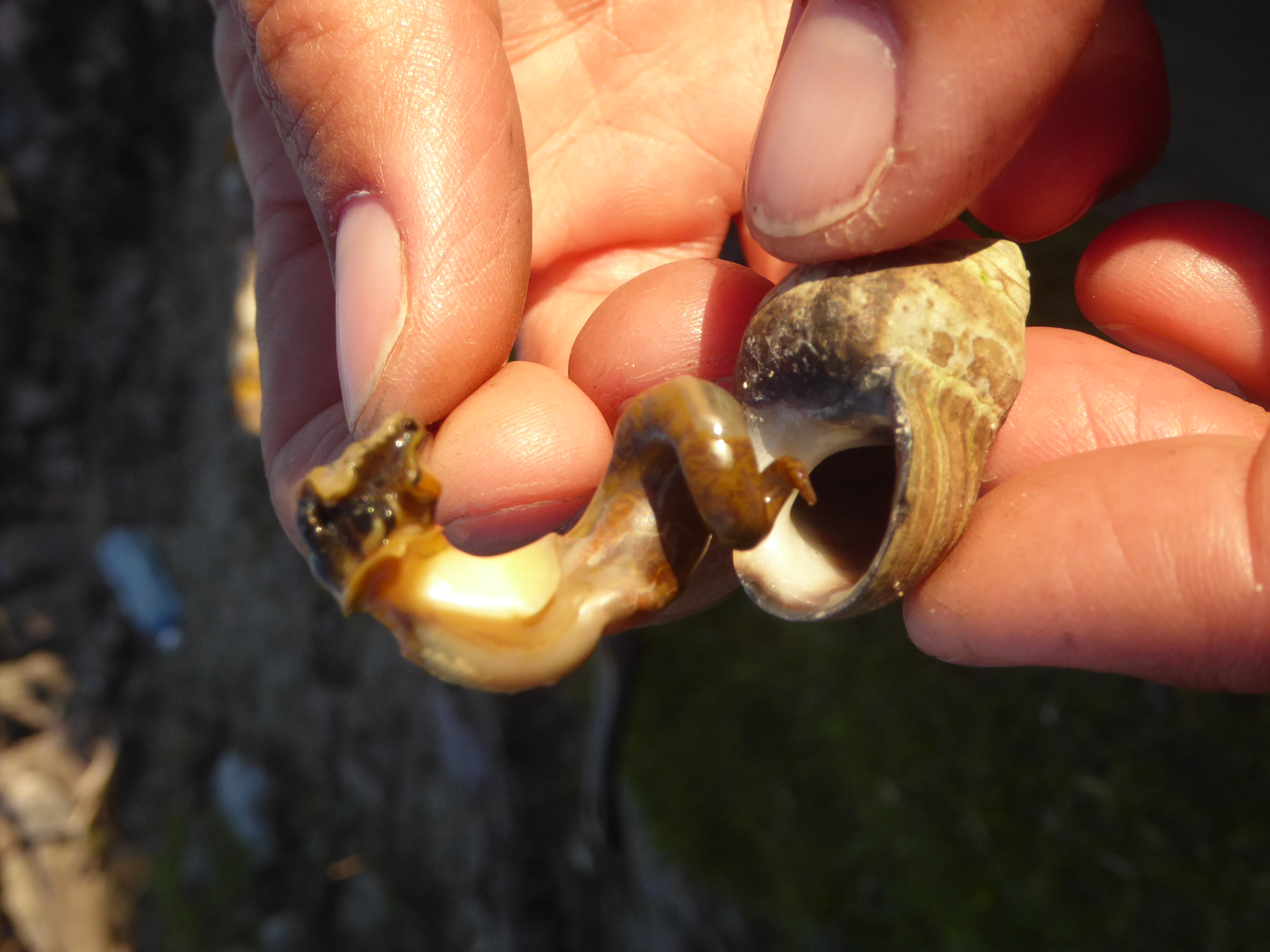 After dinner and some tea, we leave the group and head back to our tent. What a wonderful day, just sharing and learning with a person you’ve never met before and meet on an “uninhabited” island. We should add seaweeds to our diet because we now experienced how delicious they taste.

If you look for a simple seaweeds identification chart you can use one from the Field Studies Council (FSC). This is an environmental education charity providing informative and enjoyable opportunities for people to discover, explore, and understand the environment.