Slow Traveling is exciting because it is not about the big and expected stories of visiting major landmarks or tourist traps, but rather the surprise of an unexpected small and beautiful story around a not well-known monument or place.

Walking to Mont-Saint-Michel in Normandy

Last week we visited the Mont-Saint-Michel in Normandy. Quite an achievement for us, because of the many kilometres travelling by car. We had pushed it a bit because we were tired at the start of the holiday. It was nice but also very busy and not so surprising. Everywhere you see the postcards and images, and it is almost of you already saw the best bit before you got there. Going around, the beauty of the island has to compete with the tourist shops screaming “buy my stuff!!”.

Now we are on the way back and trying to find a place to park our mini camper, relax a bit and get a good night sleep. We drive through this string of small county roads reading the landscape. We like the mix of forest and agricultural landscapes because the edges give good opportunities for nice stealthy camping spots. Then we see this old tourist sign. It is probably of placed in the 50’s, based on the look of the lettering of the enamel sign. “Monument de la Rouge Mare” reads the text. We follow the little lane into the forest and end up at a huge monument. It’s a good place for the night and I start drawing. 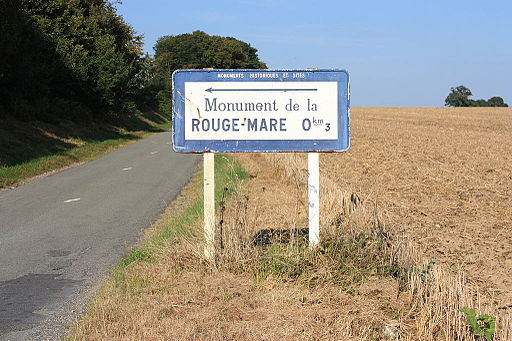 The monument reads “Combat de la Rougemare et des Flamants” and just the names of 4 men and Octavie Delacour, almost the name of a Harry Potter character. Another old tourist sign reads “Embuscade Allemande (16 Septembre 1914)”. My French is not too good but this sounds like an ambush of Germans. While drawing, I get more and more intrigued. We are far south of the Great War frontline, Germans here??

There is no info panel so the research starts at home. I won’t go over the full story, but in short, it is a German raid on the Seine. Three German vehicles with sappers were loaded with 500 kg of explosives and en-route to the bridges of the Seine near Rouen. They are able to drive through France just because people think they are English soldiers, although they are in there German uniforms and drive cars with German licence plates. As one of the vehicles breaks down, the farmers in the area offer their help to the “English”, who answer them in English and bad French. After the repair, and after shaking hands with the French farmers they drive on.

This, I find the first funny fact. It would be impossible nowadays, with the internet, television and travelling. You would recognise a Brit or German just by their posture and accent alone. But in those days they never did hear a foreign language or saw a foreigner.
Then the Germans halt in a forest, hiding for the day. This is where the 56-year-old lady, Octavie Delacour comes in the picture. She walks through the same forest and is temporarily halted by the Germans. The let her go probably convinced that the pass as Brits again. However, she recognises the Prussians from the 1870 war who had occupied the area, when she was just 12 years old.

Walking to the nearest village, she informs the brigade commander of the Gendarmerie in Gournay-en-Bray. He, however, is not taking her completely seriously. In the end, he sends some men but they go ill prepared. The spot the German sentinel but three gendarmes are killed instantly and the local guide is fatally wounded. Is this what happens if you take half your population not serious in matters of war?

In the end, the commando is arrested, the bridges are saved and Octavie becomes a hero. Honoured with a monument somewhere hidden in a French forest. And for me, it might be a story that leaves a bigger imprint in my memory than the grandeur of Mont-Saint-Michel.

Story on wiki (in French)